One French Word: épinards, a recipe for Spicy Indian potatoes and spinach

You either love or hate spinach. Most children won’t even come to table if there is spinach on the menu, but it’s a favourite vegetable of one of my little grandsons. Baby spinach leaves are preferable to larger, more mature ones, but the latter have more flavour. In India, spinach is used in an enormous number of recipes. Just wilted, it keeps its colour and a lot of its nutrients. I add a handful to all sorts of things – last night I had baked eggs with spinach, the day before the recipe I am about to share. I eat baby leaves in salad, wilted by pouring crispy bacon bits and their fat over them.

épinards (masculine plural noun) (theoretically it has a singular but this is never used) = spinach (never pronounce the ‘s’ at the end of the word).

We saw last year that the circumflex (^^) often denotes a missing s in English, that is, if you put an ‘s’ in the place of the circumflex, you will sometimes be able to guess what the word means. It is often the same with an initial é. Replace it with an s and you will have, sometimes exactly, sometimes near enough, the English word. So épinards = spinach; épice = spice, I can’t think of any more right now.

And so to the recipe.

Ingredients for 1 person as a main meal, 2 people as a vegetable dish accompanying meat : 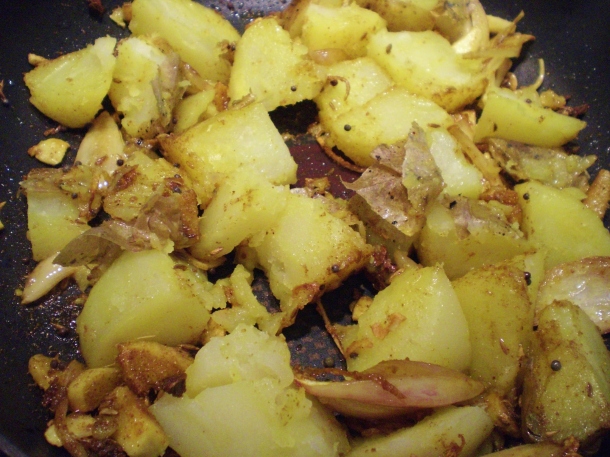 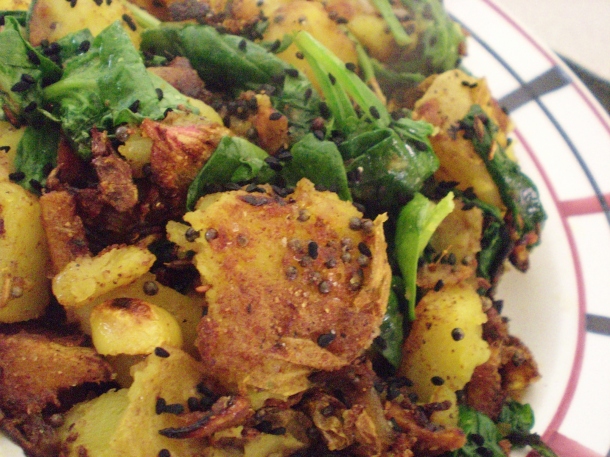 This is an excellent vegetarian dish, very satisfying. But if you feel you need meat, it can accompany any meat dish. Of course I cannot pretend to have invented this, but let us just say that I used no recipe to concoct it! I just pulled spices out of the cupboard and thought very hard of a dish I tasted in India. 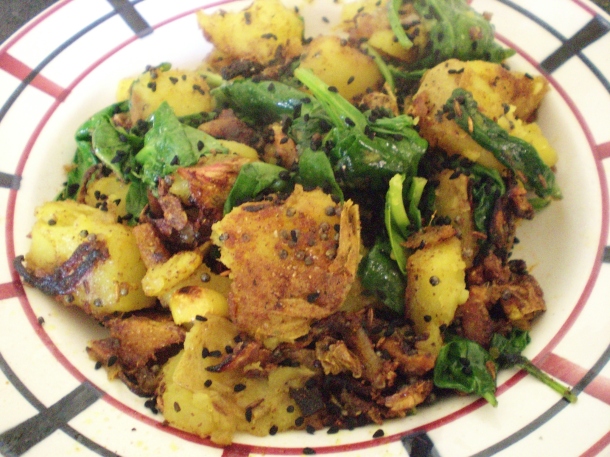 Parmentier, a surname which has become an adjective : parmentier (invariable), denotes a dish in which the potato plays a great part. Pronounced par-maan-tyé,  with no particular stress.

Monsieur Antoine Augustin Parmentier, 1737-1813, was by profession a chemist, whose major work was in agronomy and nutrition. The humble potato arrived in Europe from Peru in the 16th century, but was cultivated simply as animal fodder. Considered unfit for human consumption, it was the work of Parmentier that convinced the Faculty of Medicine in Paris in 1772 that the potato was a useful source of carbohydrate for the starving population. 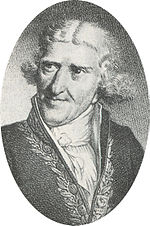 His findings, however, did not convince many people. So he resorted to a ruse to get the population to try the new tuber: he had the potato fields outside Paris kept by armed guards during the daytime, but not at night. Puzzled as to why the fields were valuable enough to be guarded, people came to steal the potatoes by night and found them to their liking.

Thank you, Monsieur Parmentier; where would we be without the potato today? Now you will know if you see “parmentier” on the menu of a French restaurant that we are talking about potatoes. All sorts of dishes are named after him, but the most famous surely is my recipe for today: le hachis parmentier, the French equivalent of shepherd’s pie (hachis simply meaning chopped, here chopped meat).

For 6 people you will need:

7. Spread a layer of potato over the meat in your serving dish or dishes. Make pretty marks on the top with a fork, sprinkle with grated cheese (optional but delicious) and pop two or three little pieces of butter on top. 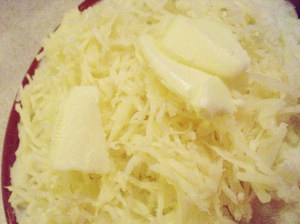 With butter and cheese on top

8. Put the dish in the oven for 25 minutes, and finish under the grill to brown the top of the potato and/or the cheese. 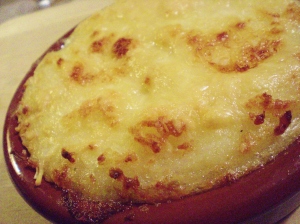 This dish freezes wonderfully, so it is worth making a lot. I freeze individual portions.  It’s so lovely to have it sitting there when you don’t feel like cooking. You can either freeze just the meat in portions, and add potato later, or the whole thing, cheese and all, before the oven stage. Then all you have to do is unfreeze and heat up.